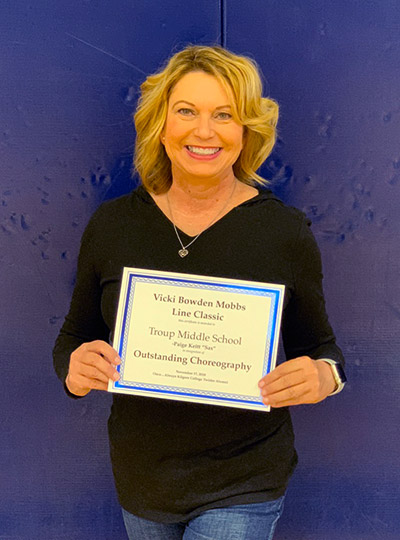 Mrs. Keitt started taking twirling lessons when she was in second grade. She was a twirler and drum major while attending middle and high school in Henderson, Texas. After high school, Mrs. Keitt attended Kilgore College where she was a member of the twirling line for two years before going to Stephen F. Austin. While at SFA, she was a Twirl-O-Jack her junior year and served as Head Twirl-O-Jack her senior year in college.

Mrs. Keitt earned a Bachelor's of Science in Education from Stephen F. Austin State University in 1983. She returned to Kilgore in 1985 to become the first official director for the Kilgore College Twirlers. She says that the years she spent from 1985 until 2001 as director for the KC twirlers were sixteen of the best years of her life. She also enjoyed meeting and getting to know so many wonderful young ladies and their families. Mrs. Keitt retired as director of the Kilgore College Twirlers in 2001 to devote more time to raising her two young daughters.

Mrs. Keitt was a second grade teacher for Henderson ISD for 24 years. She became a certified Reading Recovery teacher during her last four years at HISD. She retired from teaching in 2008 and this opened the door for her to return to something she loved very much. She returned to her former position as director of the Kilgore College twirling line in 2009. Mrs. Keitt continues to serve at the director of the Kilgore College Twirling Line and also sponsor and choreographer for the Henderson Middle School and High School twirling lines.

Mrs. Keitt has been married to Brad Keitt since 1983 and they have two beautiful daughters, Christian and Collyn.

Precision Twirl was established in 2013. Owning her own twirling studio has always been a lifelong dream for Mrs. Keitt.